This post is cross-posted with our friends at Source.

Animated gifs have immediate visual impact — from space cats to artistic cinemagraphs. For NPR’s “Planet Money Makes A T-Shirt” project, we wanted to experiment with using looping images to convey a quick concept or establish a mood.

However, GIF as a format requires so many compromises in image quality and the resulting files can be enormous. A few months ago, Zeega’s Jesse Shapins wrote about a different technique that his company is using: filmstrips. The frames of the animation are stacked vertically and saved out as a JPG. The JPG is set as the background image of a div, and a CSS animation is used to shift the y-position of the image.

Benefits of this approach:

We decided to use this technique to show a snippet of a 1937 Department of Agriculture documentary in which teams of men roll large bales of cotton onto a steamboat. It’s a striking contrast to the highly efficient modern shipping methods that are the focus of this chapter, and having it play immediately, over and over, underscores the drudgery of it. 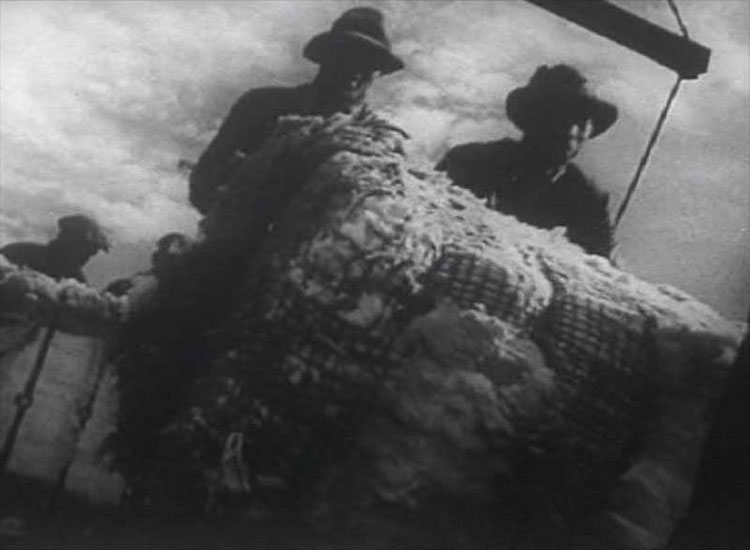 (This is just a screenshot. You can see the animated version in the “Boxes” chapter of the t-shirt site.)

The hardest part of the process is generating the filmstrip itself. What follows is how I did it, but I’d love to find a way to simplify the process.

First, I downloaded the highest-quality version of the video that I could find from archive.org. Then I opened it in Adobe Media Encoder (I’m using CS5, an older version). 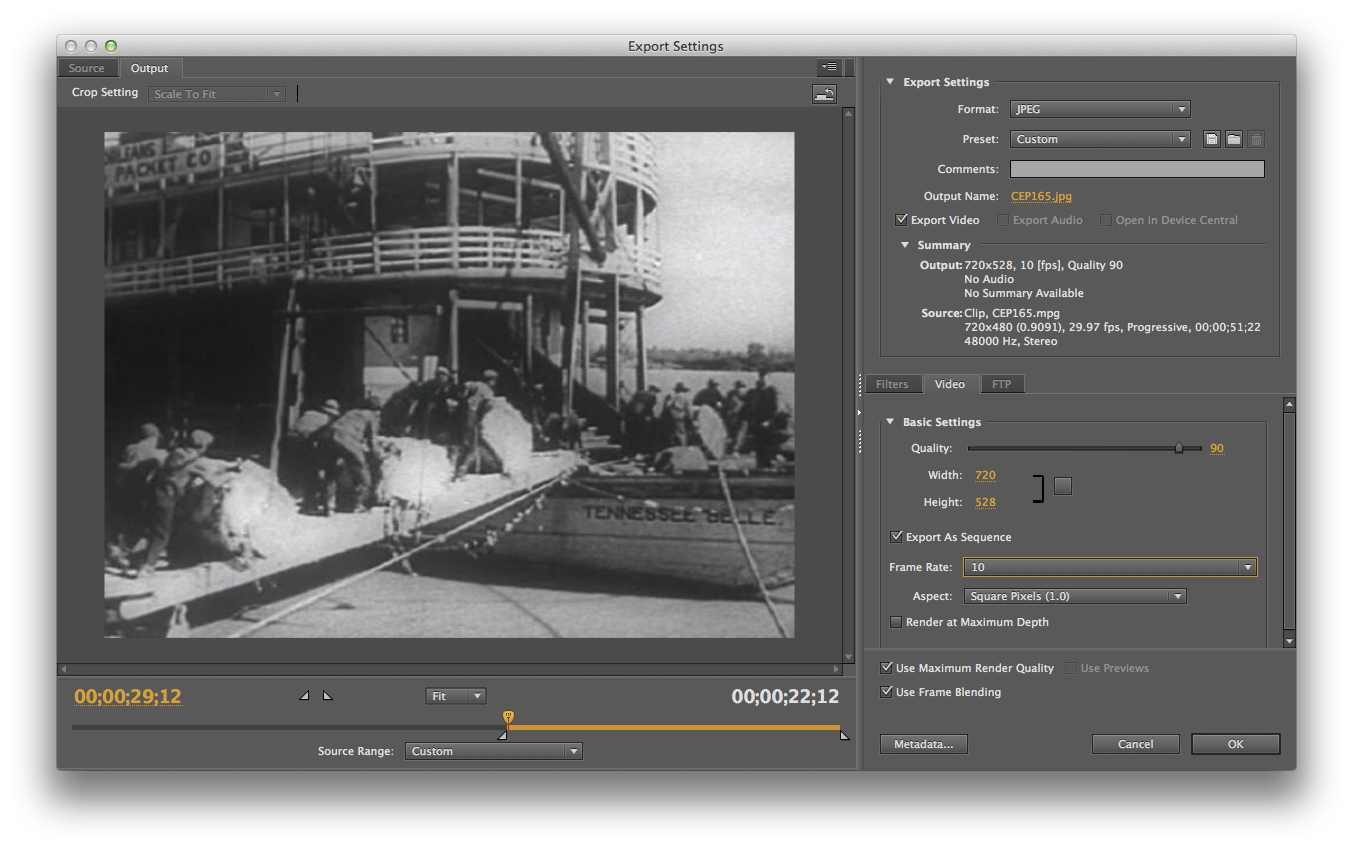 I flipped to the “output” tab to double-check my source video’s aspect ratio. It wasn’t precisely 4:3, so the encoder had added black bars to the sides. I tweaked the output height (right side, “video” tab) until the black bars disappeared. I also checked “Export As Sequence” and set the frame rate to 10. Then, on the left side of the screen, I used the bar underneath the video preview to select the section of video I wanted to export.

The encoder saved several dozen stills, which I judged was probably too many. I went through the stills individually and eliminated unnecessary ones, starting with frames that were blurry or had cross-fades, then getting pickier. When I was done, I had 25 usable frames. (You may be able to get similar results in less time by experimenting with different export frame rates from Media Encoder.)

Then I used a Photoshop script called Strip Maker to make a filmstrip from my frames. 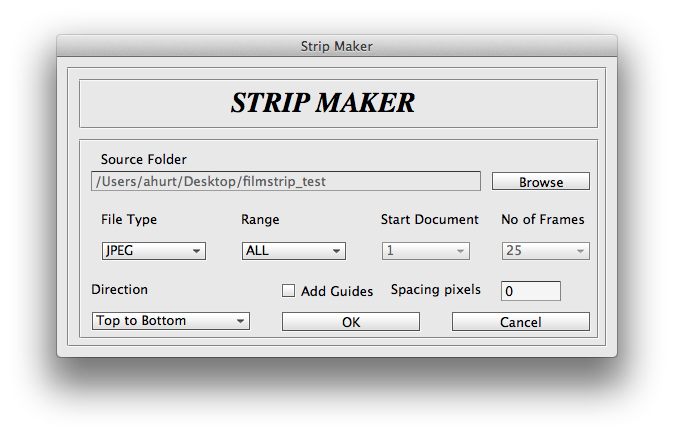 And here’s the result, zoomed way out and flipped sideways so it’ll fit onscreen here:

I exported two versions: one at 800px wide for desktop and another at 480px for mobile. (Since the filmstrip went into the page as a background image, I could use media queries to use one or the other depending on the width of the viewport.) Because the image quality in the source video was so poor, I could save the final JPG at a fairly low image quality setting without too much visible effect. The file sizes: 737KB for desktop, 393KB for mobile.

And Now The Code

Here’s how it appeared in the HTML markup:

On page load, as part of the initial JavaScript setup, I call a series of functions. One of those sets up CSS animations. I’m doing this in JS partly out of laziness — I don’t want to write four different versions of each animation (one for each browser prefix). But I’m also doing it because there’s a separate keyframe for each filmstrip still, and it’s so much simpler to render that dynamically. Here’s the code (filmstrip-relevant lines included):

I set a variable at the very beginning of the function with the number of frames in my filmstrip. The code loops through to generate CSS for all the keyframes I need (with the relevant browser prefixes), then appends the styles just before the </head> tag. The result looks like this (excerpted):

Lastly, I have a function that resizes .filmstrip-wrapper and makes the filmstrip animation work in a responsive layout. This function is called when the page first initializes, and again any time the screen resizes. Here it is below, along with some variables that are defined at the very top of the JS file:

Footnote: For the chapter title cards, we used looping HTML5 videos instead of filmstrips. My colleague Wes Lindamood found, through some experimentation, that he could get smaller files and better image quality with video. Given iOS’s restrictions on auto-playing media — users have to tap to initiate any audio or video — we were okay with the title cards being a desktop-only feature.