This story started, as many do, with a tweet.

Just ran the numbers: of the 46 GOP-held House seats in the deepest trouble (Toss Up or Lean/Likely D at @CookPolitical), 63% contain a Whole Foods Market (vs. 38% of all 194 other GOP-held seats). https://t.co/pF3pt9mrbS

Fast forward a few weeks, and we’ve published a series of maps with the headline “What Do Blue And Red America Have In Common? Craft Breweries — And More”.

Everyone talks about how divided the country is, especially after elections, so I thought it would be interesting to show what kinds of things Americans have in common, as well as what we don’t. I think we were all surprised that small breweries were almost as common in red districts as they were in blue ones, and I personally wasn’t expecting the gap in farming districts to be quite as big as it was. 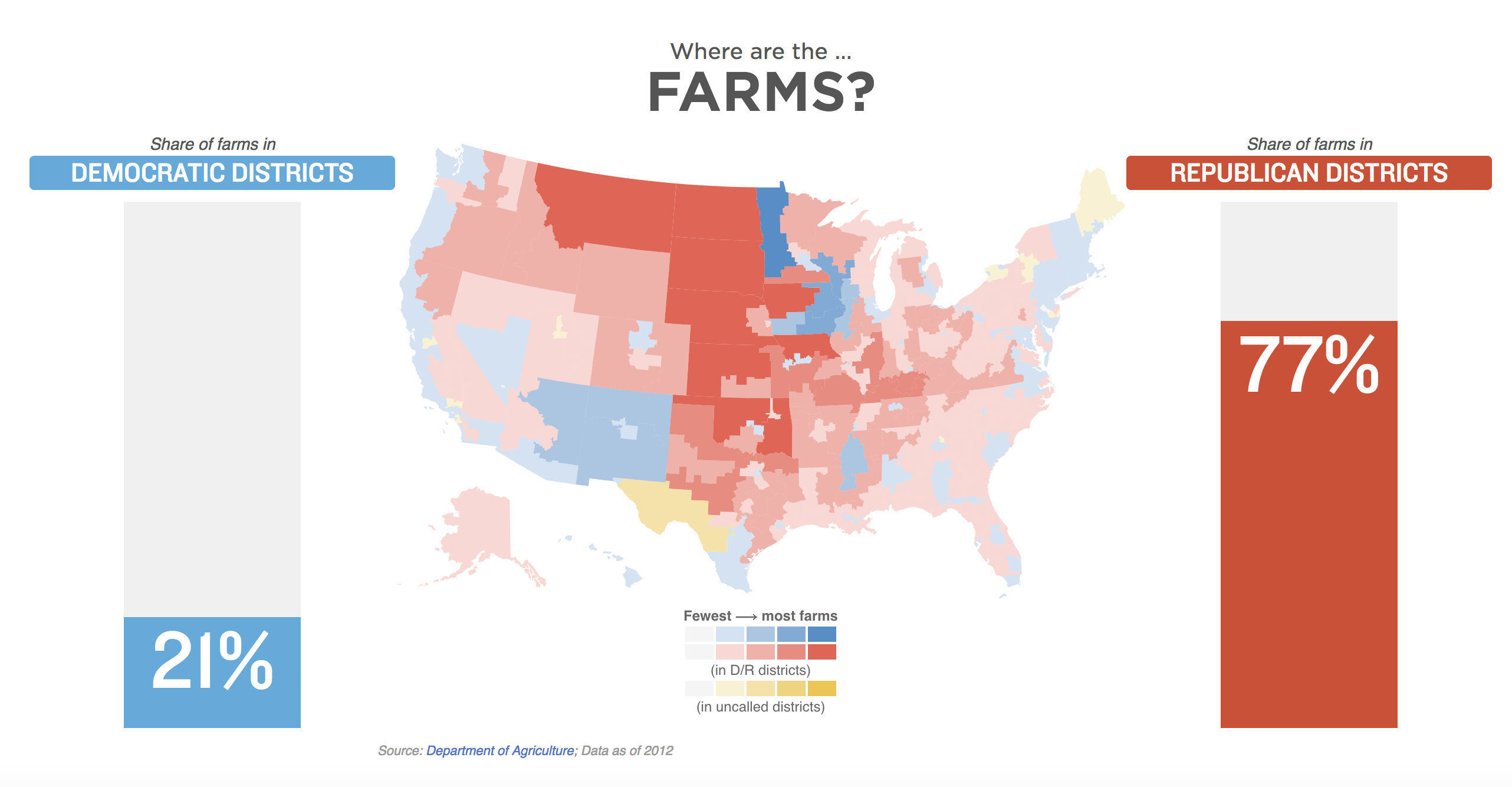 This was my first map-heavy project for NPR, and my first time doing shapefile analysis on congressional districts. Though it involved at least a dozen data sources, it wasn’t really as hard as it might sound.

Step 1: Figure out what what’s worth mapping

I wanted this to show the kinds of things that are important to lots and lots of Americans. I still don’t think I have a perfect single word that describes these kinds of locations — I toyed with “cultural indicators”, and in the story we went with “touchstones of American life.”

I did an everything-even-your-bad-ideas brainstorm to come up with an initial list of things I might find data for.

Step 2: Get the data

For each of those, I did some variation of Googling “X locations in United States data.” For some it was easy — Amtrak publishes a list of their train stations with latitudes and longitudes for anyone to download. Others I realized would be impossible to do in a timely way — the list of all U.S. gyms, for example, isn’t something that anyone tracks publicly.

What was important during this process was getting the precise latitude and longitude for each location we would be including. Since most data sources don’t group their records by congressional district, (shoutout to USDA, which actually does) we would need to do our own analysis of which congressional district they fall in.

That congressional district boundary data is provided as a shapefile from the Census Bureau, and is updated with the most recent redistricted boundaries in Pennsylvania.

Step 3: Load the data with the most recent congressional district maps

To analyze which districts the locations fall in, I used open-source software called QGIS. If you want to do a similar analysis, here are the steps:

I put each of those new files in a folder and ran a Python script to combine them with district data showing who had won each district in the 2018 general election.

What I could have done differently

Though this whole process wasn’t really that hard, it did involve a lot of steps. That means there was more room for error — whoops, didn’t really mean to click that Delete button — and less of an automated process to follow for next time we want to do something like this.

Our new team developer Thomas Wilburn told me that we could have used PostGIS, which I’ve never touched before, to script much of this process. If we didn’t want to add another tool, we could have probably used QGIS to merge the winners for each district with the district location information, cutting the extra Python script out of the process.

Once I had all the data, I opened up a d3.js-based U.S. map template that my colleague Alyson Hurt developed. I passed the data to Javascript to color each congressional district based on its GEOID and the count of locations inside in it.

The graphic you see repeated 11 times on the story page is actually the same static file iFramed in each time, but with an added parameter of chartdata=XYZ. The Javascript reads that parameter then displays the appropriate data. That code is available here.

Complete data (excluding the Brewers Association’s proprietary they gave us to use for this piece) is available here.