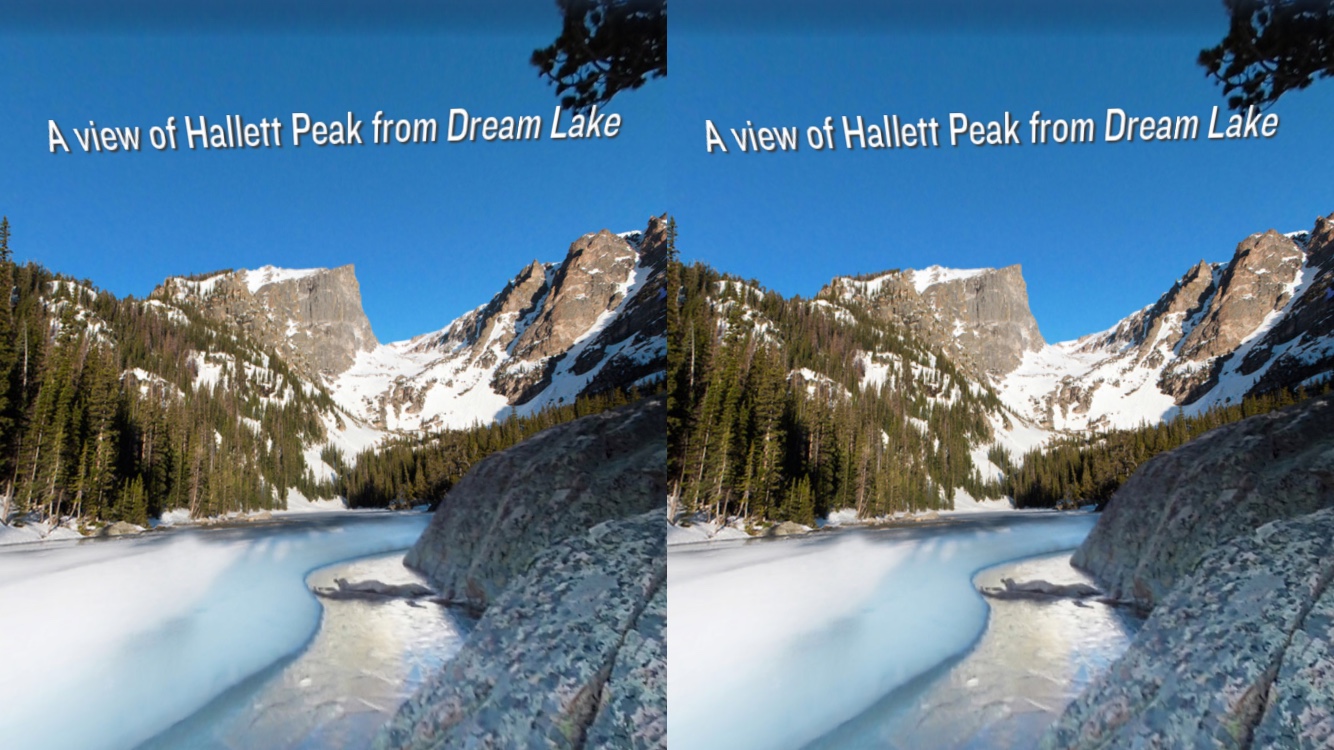 A screenshot of Standing At The Edge Of Geologic Time in virtual reality.

Last Wednesday, the NPR Visuals Team published a virtual reality story about the geologic history of Rocky Mountain National Park. It was weird! Making a virtual reality project on the web presented a lot of new challenges for us. This blog post will explore some of the challenges and how we solved them.

We had three main goals when creating the web experience out of these assets:

Given these requirements, we wanted to work with WebVR. The experimental JavaScript API is basically not supported in any browsers yet, but work on making WebVR a reality is active, and a few projects have sprung up in an attempt to getting people working with WebVR today.

Google VR has created VR View, an incredibly simple way of creating a 360º image viewer. The code is all open source, and we could have modified the experience however we wanted, but the starting point is so opinionated that making an experience that integrated well with our audio and design style felt onerous. But for just getting an image on the page, VR View is as simple as it gets.

Boris Smus maintains the WebVR Boilerplate, a starting point that uses Three.js that has been used by our friends at the LA Times and National Geographic. It is a great starting point, and we would have used this, but we found a project based on Boris’s work called A-frame, spearheaded by Mozilla’s VR group.

An Introduction to A-frame

A-frame’s key feature is its markup-based scene-building system. Instead of building your entire scene in JavaScript, A-frame gives you the ability to build scenes using custom HTML tags. Because A-frame defines custom HTML tags for you, they are treated by the browser as DOM elements, making them manipulable in JavaScript just like any other DOM element.

This would build a VR scene that projects an equirectangular image across a 360º sphere. In three lines of markup, we have the basis of our app.

Entities are general objects that, by themselves, do nothing, like an empty <div>. A-frame represents entities as tags. Components define aspects of entities, such as their size, color, geometry or position. These appear in A-frame as attributes of those tags (perhaps confusingly, standard HTML attributes like class still work). Components can have multiple properties; for example, the camera component has a fov property which defines the field of view, an active property which defines whether or not the camera is active and more. Importantly, components are reusable — they do not rely on certain entities to work.

Returning to our example, <a-sky> is our entity, and src is a component that loads an image and projects it into the sky.

There is one caveat to this: <a-sky> is technically not an entity. A-frame provides one extra convenience layer beyond entities and components: primitives. Primitives look like entities, but are in fact an extension of entities that make it easier to perform common tasks, like projecting a 360º image in a 3D scene. In short, they are entities with pre-defined components. An <a-sky> is an entity with a pre-defined geometry component.

In our story, we wanted to display multiple equirectangular images in a sequence tied to our audio story. A-frame poses a problem: you can only have one scene in A-frame. And when A-frame builds that scene, it renders everything at once. So how can you move between multiple scenes inside your one scene? You show and hide entities.

A component available to all entities in A-frame is the visibility component. It works simply: add visible: false to any entity tag and the entity is no longer visible.

Thus, the basic structure of our A-frame scene looked like this:

We timed switching visible scenes with certain points in our audio file. By hooking into the HTML5 audio timeupdate event, we could know the current position of our audio at any time. We attached the time we wanted scenes to switch as data attributes on the scene entities. Again, A-frame entities are just DOM elements, so you can do anything with them that you can do to another DOM element.

Using the timeupdate event, we switched the visible scene once we past the end time of the currently visible scene. This is a technique we’ve used many times in the past and you can read more about here.

Another core piece of A-frame is the ability to animate elements within a scene. We used A-frame’s animation engine to control the “hands-free” experience we offered on desktop.

To do this, we animated A-frame’s camera. The camera itself is an entity within the scene. To animate an entity, you create the animations as tags that are children of the entity. For example:

This animation will rotate the camera in 40 seconds.

You can also begin and end animations based on events. You pass the names of the events as attributes on the animation tag:

Then, in JavaScript, you can have the camera (or any entity) emit an event, which will either begin or end the animation.

To make our guided experience work, we had an animation for each of our scenes. When we entered the scene at the correct place in the audio, we emitted the proper event that started the animation.

Putting It All Together

While it is great that A-frame is a markup-based system, having the team manage the entire experience by modifying markup would have been frustrating and difficult. So we turned to a system we have been using for years: spreadsheet-driven templating. Using a spreadsheet allowed us to put each entity in its own row. Then, columns corresponded to components on the entity or other data we needed to attach to the entity via data attributes.

A simplified version of the spreadsheet looks like this:

Using Jinja templates and our copytext library, we were able to loop through each row and build our scene. For example, the first row in our sheet would result in the following:

In a separate spreadsheet, we built each animation we wanted for guided mode. Using the id of the scene, we could effectively join the two sheets together on the id. Here’s a sample of the animation spreadsheet:

Then, within the camera entity as demonstrated above, we can loop through this spreadsheet and build each animation. The first row of the spreadsheet would build this:

Take note of the begin attribute. By using the id of the scene, each scene’s animation can begin independently. In our JavaScript, we would emit that event as soon as the scene switched.

Combining these two concepts, our A-frame scene looks like this in a Jinja template:

There are more things unique to our particular UI that I did not include here for sake of simplicity, but you can see the complete HTML file here.

There are lots of little things we encountered building a VR experience that didn’t fit in the explanation above but would be good to know.

In the coming days, we will publish a couple more things about our project, including how we made our images and soundscapes and what we’ve learned from analytics about how people used our VR project. Stay tuned!